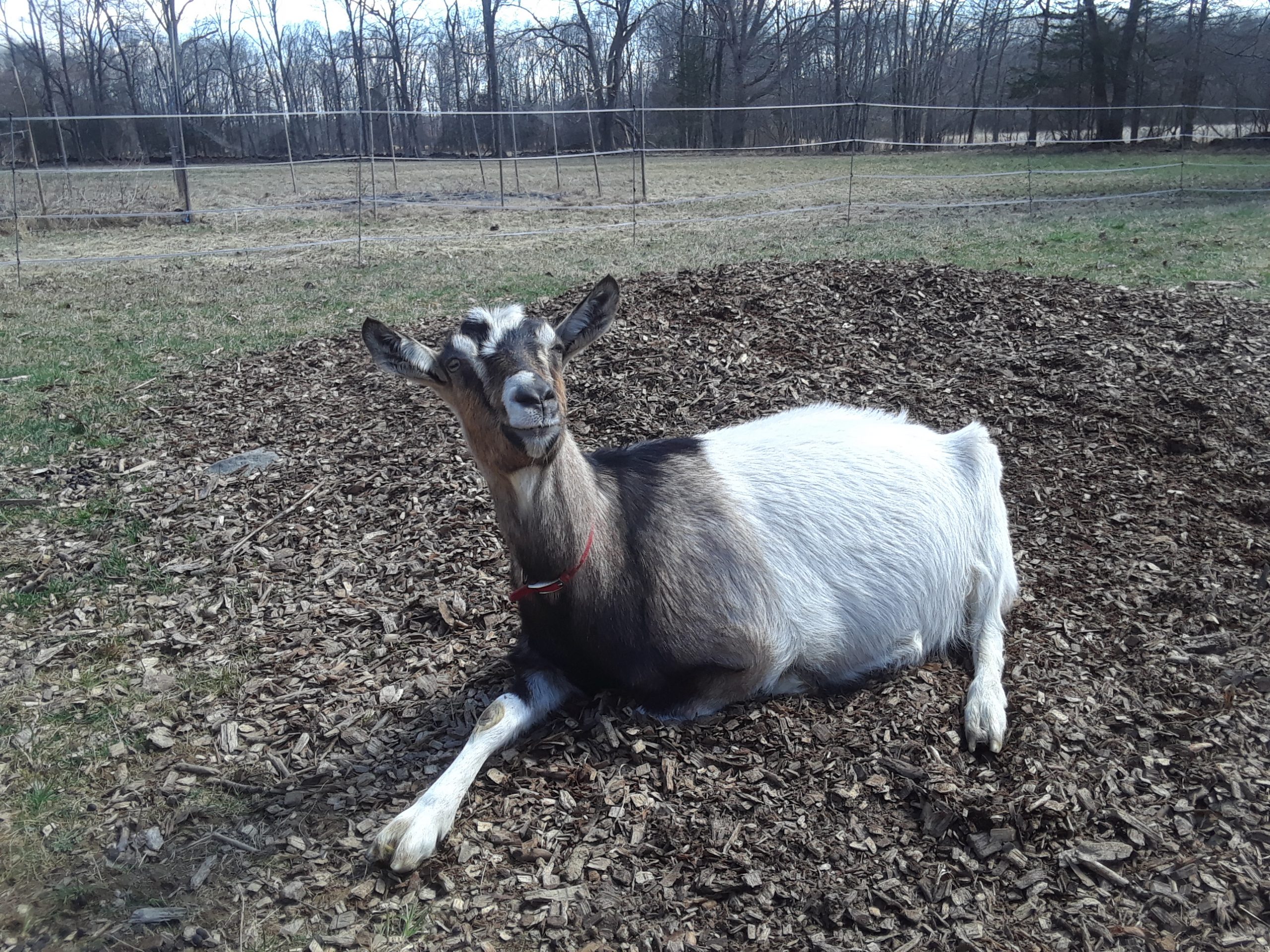 Last year, Fall of 2018, was our first year breeding our does.  Goats are in heat every 3 weeks during the fall and early winter.  Its pretty easy to tell when they are cycling because they make a terrible noise, which is their way of telling the eligible males that they are interested in hooking up.  The first time Carmen and Josslyn cycled, we made note of it and were ready three weeks later to take them to their beau.

We didn’t have a buck in the herd yet, so we took Carmen and Josslyn for visits to their boyfriend a few hours away. Fortunately, they were cycling at the same time, so we hoped that one November field trip would be enough.  Josslyn never cycled again, so we were confident that she was bred.  Carmen, on the other hand, went on 2 more dates before we hit the timing just right.  The window for breeding during a goat’s cycle is pretty short, only about 24 hours.  As a result of Carmen’s delayed breeding, we had kids in April 2019 and then kids in June 2019.  That meant we were rearing kids for 5 months in 2019! Needless to say, we decided that all of our 2020 kids would be born in April (unless some goat thinks otherwise).

In Fall 2019, we were watching and listening for signs of cycling.  One night, in early October, Tracker the dog barked in the middle of the night.  This usually means he needs a nature break.  I put on my robe and took Tracker outside.  A few seconds after we had been outside, I heard the most terrible goat noise coming from the ladies’ goat house.  I let Tracker finish his business and ran inside to change my clothes.  In the meantime, I passed Matt who was pulling on his rubber boots, while still wearing his pajamas, so he could run out to the goat house.  Some goat must be hurt or stuck or something.  The noise was a loud, raw, distressed goat bleat, with an amount of urgency that I had never heard, ever.

I met Matt in the goat house a few minutes later. He was looking at the four ladies.  The four ladies were looking back at him quizzically. If I could have read their minds, they were probably thinking, “Hey, what are you doing here? Carmen is just looking for her boyfriend.”  And sure enough, at 1:30am in early October, Carmen started cycling for the season.  She wanted a middle-of-the-night booty call. She thankfully stopped calling for her beau, so the rest of us could sleep.

She was not giving up, however.  The next day, she was calling, and calling, and calling.  I am glad we only have 1 neighbor who also has livestock.  The noise was wretched. We continued about our day, not thinking much about Bjorn, our buckling that joined the herd in April 2019.  He lived with the rest of the boys (8 wethers or castrated males) on the other side of the pasture. He was fenced. Nothing to worry about.  Also, I didn’t want to start breeding does until November. We’d just ride this one out. Everything should be fine. Next cycle, or maybe even the one after, would be good timing to breed Carmen. I didn’t want kids too early the next spring.

And then I got the text from Matt… “The boys got out and Bjorn was in the ladies’ house.” My heart sank. I was sure that Carmen was bred.  I didn’t want kids in March! Too early, still winter, might have snow still! I investigated the ladies later that evening.  Carmen smelled bucky. Really bucky.  This was a tell tale sign that she and her new beau got busy.  Josslyn didn’t smell too bucky and Tina and Louise, my doelings who were too little to be bred yet, didn’t smell bucky at all.

We had to wait and see if Carmen cycled three weeks later.  I also had to make a decision about Josslyn.  She hadn’t cycled yet, so I didn’t know when she’d be ready to breed.  Do I bet that Carmen is bred and breed Josslyn as soon as she cycles, so they kid close together?  I decided to take the first opportunity to breed Josslyn. That way, if Carmen wasn’t bred, we could breed her in the next cycle and hopefully kids from those two would be closely spaced.

Just a week later, Josslyn cycled and we lept into action.  We constructed a “date pen” in the pasture out 4 pieces of cattle panel. Matt kept any eye on the pen as I first brought Josslyn over and then brought Bjorn over.  They didn’t take long to get down to business.  We laughed at the scenario: 7:30 in the morning, Bjorn is sniffing Josslyn’s girl parts, peeing on his beard, sniffing her pee, lip curling, making funny grunting noises and then it was done.

Three weeks after Carmen and Bjorn’s impromptu date, she didn’t cycle, so we were convinced she was bred. Josslyn never cycled again either.  Chiffon and Moon Unit joined our herd already bred, with due dates at the end of March and beginning of April, respectively. Fast forward 4 months, I have 4 ladies that look like Goodyear blimps. Carmen is due March 7, Josslyn is due March 15, Chiffon is due March 26 and Moon Unit is due April 8.

My goal of having all of my does kid in April won’t be realized- we are a month early.  The up side is that they are all kidding within a month of each other, so we should be done rearing kids by the end of July (not September like last year!). Stay tuned for more news about this year’s kids.

P.S. The photograph for this post was taken last year, not long before Josslyn kidded.  She was enjoying the sun on a nice early April day.